Today, Sophie Auster announces US tour dates in support of her latest release, Dogs and Men. The album has been called “soaring” (W Magazine), with The New York Times praising the album’s “sultry, folksy vocals with soul- (and teeth-) baring lyrics.” A full tour itinerary is below. Additionally, today she premieres a video for her studio cover of Bonnie Raitt’s classic single, “I Can’t Make You Love Me.”

Watch “I Can’t Make You Love Me” via YouTube 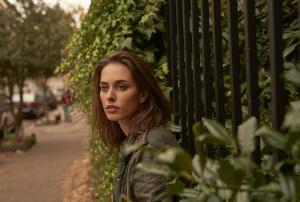 “If Tom Waits and Billie Holiday were to have a style child, singer-songwriter Sophie Auster would be it,” writes Vogue, describing the unique blend of power and glamour that Auster commands. The Deli likens her music to “a cross between Fiona Apple’s righteous rage and Gillian Welch’s homespun folk yarns…” While Auster cites these artists as influences for her songwriting, her music is wholly her own. Her latest album, Dogs and Men (Out Loud Music), has been called “soaring” (W Magazine). The New York Times praises the album’s “songs that meld sultry, folksy vocals with soul- (and teeth-) baring lyrics” and recently premiered the video for the album’s first single, “Bad Manners.” Today, she premieres a video for her studio cover of Bonnie Raitt’s classic single, “I Can’t Make You Love Me.” A spring tour has also been announced, a full itinerary can be found below.

Sophie Auster recently completed a sold-out run of West coast dates supporting Coeur de Pirate and she’s currently working on her next album due out in early 2017. Additionally, Sophie has a part in the series Mozart in the Jungle with Gael Garcia Bernal, which premiered in January on Amazon Prime.

While stylistically Auster resembled the progeny of music icons Waits and Holiday, in truth she is the daughter of writers Paul Auster and Siri Hustvedt. Yet music has always been her passion, beginning at age 8 when she was a choir soloist. At 18, Auster released her self-titled debut on the French label Naïve. While still attending Sarah Lawrence College, Auster spent her school vacations touring and performing at festivals across Europe and South America, eventually landing her, in 2007, on the cover of Spanish Rolling Stone. She has since appeared in Vogue, New Yorker, Elle, Les InRocks, SPIN, Glamour, Velvet, Paper and was featured as one of W’s rising stars.