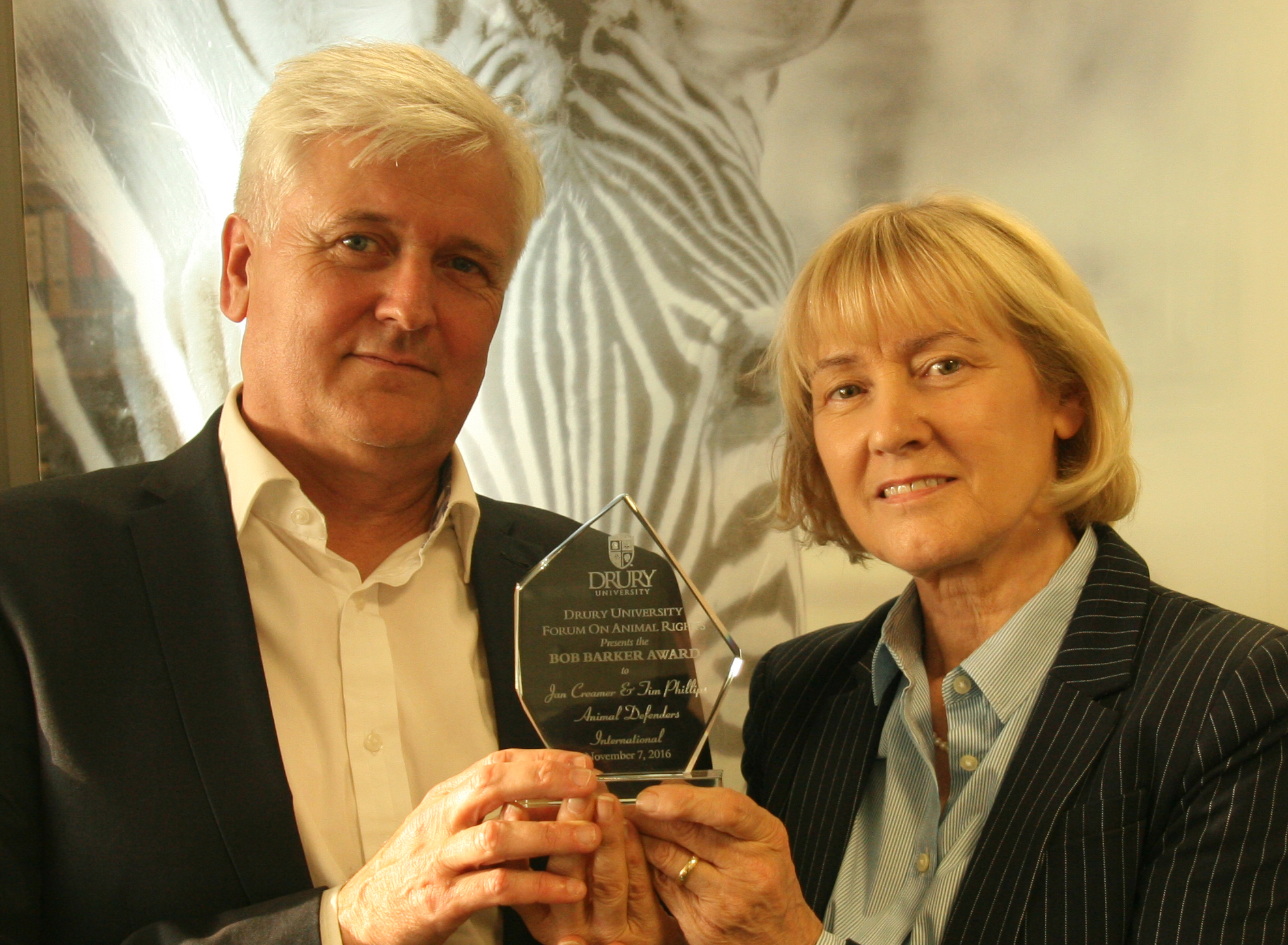 Animal Defenders International founders Jan Creamer and Tim Phillips for ‘Extraordinary Achievement for Animal Rights’
DECEMBER 19, 2016 – ‘The Drury University Forum on Animal Rights Bob Barker Award for Extraordinary Achievement for Animal Rights’ was presented to ADI by Patricia McEachern, Dorothy Jo Barker Endowed Professor of Animal Rights, Director of the Drury University Forum on Animal Rights, and a Fellow with the Oxford Centre for Animal Ethics.
Legendary TV host and philanthropist Bob Barker is an alumnus of Drury University, funds the Animal Rights Forum and has given substantial support to the work of ADI.
Professor McEachern cited the ADI founders’ remarkable work exposing animal suffering, running public awareness campaigns, securing animal protection legislation around the world, and leading massive rescue and law enforcement operations.  It is only the third time the award has been made.
The presentation followed a screening of the multi award-winning documentary Lion Ark – the story of the dramatic rescue of 25 lions from circuses by a team led by Creamer and Phillips as they closed down every animal circus in Bolivia.  Bob Barker funded the rescue, the first of its kind, and appears in the feature film during the rescue and addressing Congress.
The pair recently completed a similar mission in Peru enforcing a ban ADI had secured there. Over 100 animals have been rescued as the cruel industry was closed down and over 30 lions were airlifted by ADI to a sanctuary in South Africa where ADI is currently constructing 12 habitats for them to live in.
Last month Creamer and Phillips were in Congress for a screening of Lion Ark at which the introduction of the Traveling Exotic Animal Public Safety & Protection Act (HR6342) was announced.  The Bill has been introduced by Reps Ryan Costello (R-PA-06) and Raul Grijalva (D-AZ) and if passed would end the use of wild animals in traveling circuses.
ADI undercover video evidence of shocking circus abuse in the UK, Europe, USA and South America has been the key to shifting public attitudes to animals in circuses and leading to over 30 countries banning animals in circuses. The evidence has led to convictions for cruelty of leading figures in the circus industry. ADI has also played a lead role in securing bans on cosmetics testing on animals and the use of wild caught monkeys and apes in experiments in Europe.
Bob Barker said: “I am proud to be on ADI’s list of donors! In my opinion Animal Defenders International is one of the world’s most productive animal protection organizations.”
Patricia McEachern Endowed Professor of Animal Rights at Drury University said “I cannot begin to express how thrilled and proud I was to present Jan Creamer and Tim Phillips with the third Drury University Forum on Animal Rights Bob Barker Award for Extraordinary Achievements for Animals. Through tireless dedication and hard work, they built ADI into one of the most high profile and successful animal protection groups in the world.”
Jan Creamer ADI President: “We are honoured to accept this award.  We have great respect for the work of theDrury University Forum on Animal Rights and it is extra special because Drury Alumnus Bob Barker has been so important to ADI’s work.”
Under the auspices of the Forum, Professor McEachern created and directs Drury University’s innovative Animal Studies minor, one of the first in the United States at its founding, and the team-taught Animal Ethics course, which includes seven professors from various fields, as well as guest speakers.
Animal Defenders International (ADI) is active worldwide to end the suffering of captive animals in commercial use: animals used in entertainment – film, television, advertising, circuses and sport or leisure such as hunting or for products such as fur. ADI investigates, produces evidence, and reports on the scientific, legal, and economic issues for each case study, recommending solutions and distributing Information to the media, public, and officials. Where ADI’s evidence has been a catalyst for change, we collaborate with governments to conduct large–scale seizures or rescues of wild animals in captivity and relocate them to forever homes – back to their natural habitat wherever possible.  www.ad-international.org
Lion Ark:  http://www.lionarkthemovie.com