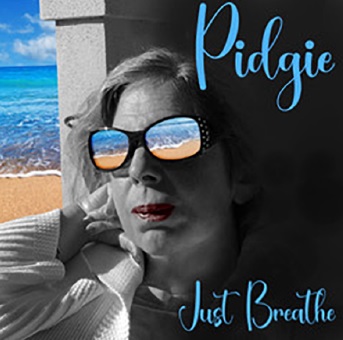 “Life is like a GPS. You may need to find an alternate route to get to where you are going but, with creative perseverance, you will always arrive at your destination!” – Pidgie

“Just Breathe”, the new record from Singer/Songwriter and self proclaimed Renaissance woman on wheels; the differently abled and exceptionally gifted former “Ms. Wheelchair Massachusetts” Pidgie (Patti Panzarino) – is available on Spotify and all the major music services now!

One of the CD’s highlights is a powerful version of the Nina Simone gospel classic, “I Wish I Knew How It Would Feel To Be Free.”

Pidgie recorded “Just Breathe” alongside a host of celebrated friends including Liberty Devitto (drums-Billy Joel): Scott Spray (bass-Johnny & Edgar Winter), Christine Ohlman (vocals, The Saturday Night Live Band), Bobby T Torello (drums, Johnny Winter/Grace Slick), Cliff Goodwin (guitar, Joe Cocker), Al Ferrante (guitar, Cyndi Lauper/Edgar Winter), Ron Rifkin (keys, Charlie Karp), and Bill Holloman, (horns, Nile Rodgers & Chic). Some select cuts include Flat-out rockers like “All Revved Up” and the first single “Accessory”, as well as the dreamy, evocative title track and the poignant “They Took You Away”; an anthem for all those lost during these turbulent past few years. The CD was produced by multi-award-winning New England record man Vic Steffens at his studio Horizon Music Group. All In, a 2011 CD with her first band OLYPSYS, was a collaboration with her husband Vinny Rinaldi, who joins on guitar for multiple tracks on Just Breathe.

With the album’s release, Pidgie has made her platform, “Creative Perseverance”, the theme of her entire life.

“Creative Perseverance empowers you to reach beyond what you ever thought possible. It encompasses every facet of your existence: your home, job, education, health, relationships and your passions,” she says. “Being able to tell my stories and feelings through my music is something I am forever grateful for.”

Born with spinal muscular atrophy (SMA), Pidgie learned to self-advocate from her now-deceased older sister, who had the same disability and mentored her at a very young age.

“The more that people with disabilities push through obstacles and participate in life, the more people will really see us,” says Pidgie, “and our acceptance and encouragement to participate increases. It becomes an upward spiral.”

Pidgie’s dedication to the theme of empowerment is unshakeable.

“Many people think that obstacles can be just physical,” she says. “But that can be changed by laws and creativity. I believe the biggest challenge toward people with disabilities are attitudes from others. I have always been one to look people in the eye and smile and say hello.”

It is obvious that Pidgie has triumphed over obstacles her entire life. Raised in the Sixties and mainstreamed, she has lived on both sides of the Americans with Disabilities Act. She earned her Bachelor of Arts degree at Hofstra University, becoming president of the organization for students with disabilities and taking two First Place trophies in wheelchair karate. She worked in both the corporate world and in the performing arts world.

“There is always a song going through my head,” Pidgie remarks, continuing: “My influences run from Stevie Nicks to Natalie Merchant, Edie Brickell, Aimee Mann and Christine Ohlman. I sing with a lot of feeling. I reach deep down into my heart and pull it out. Recently, podcaster Aj Wachtel said I sounded like Marianne Faithful ‘who purrs, then growls’—I love that!”

Pidgie was a founding member of the Coalition for Disabled Musicians (CDM) and currently serves as its vice-president. She was co-host of a popular cable TV program and hosted her own live Christian radio show on disability and empowerment for two years. She competed and won Ms. Wheelchair Massachusetts 2012 and received the Lifetime Achievement Award at the National Ms. Wheelchair America Leadership and Advocacy Competition.

“I’ve been singing since before I can even remember. I write music the way I cook; I don’t stick to recipes, I just add a little here and a little there to make a masterpiece. I like to think outside the box. I never liked paint-by-number or sheet music because it was too limiting. I like to sing by ear. I love to entertain, connect with people’s feelings, validate them, and cheer them up when I sing.”

She continues to advocate, mentor, and push through social and relational barriers to redefine the representation of people with disabilities in a more positive light. She finds that some relationship myths that can be confusing for women in general can weigh even heavier on women with disabilities.

But above it all, there is music. In another one of Just Breathe’s romps, “Kick Ass Boots,” Pidgie takes aim at a cheating ex, truth-telling a la Nancy Sinatra’s “These Boots Are Made For Walking,” and it’s a joyous moment.

You will find Pidgie right in the middle of most activities, sharing messages of creativity and the power it brings. And now, with the release of “Just Breathe”, she joins the mainstream of American popular music—for real.