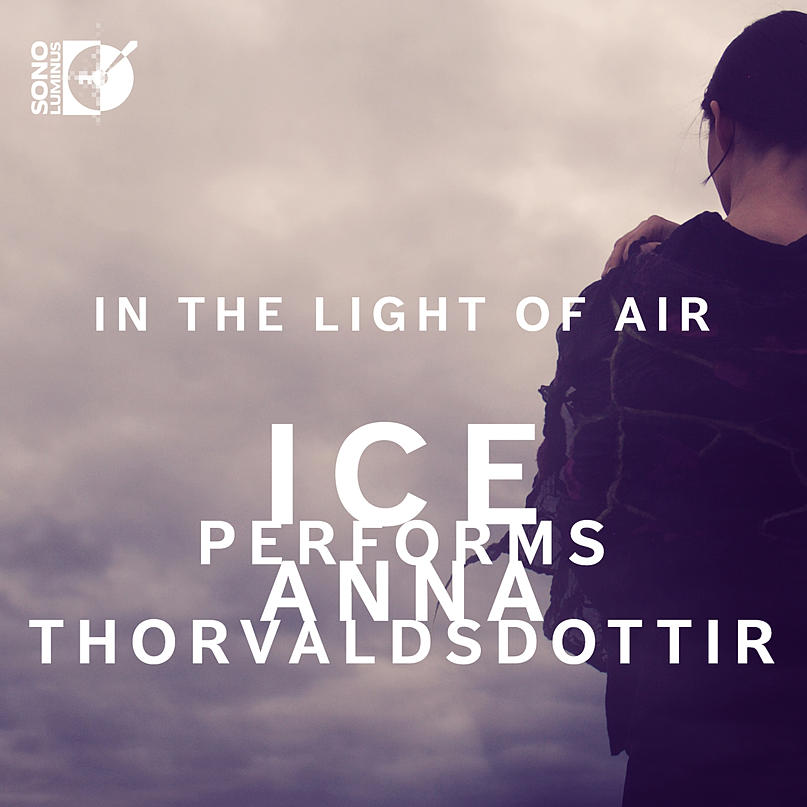 “‘In the Light of Air’ makes full-body demands on its virtuoso performers but is also guided by a taut sense of narrative . . . Recalling the post-Spectral language of composers such as Toshio Hosokawa and Kaija Saariaho, Ms. Thorvaldsdottir’s music conjures unseen worlds. In her score, she asks the players to execute particular passages ‘with calm & ease and a subtle sense of brokenness.’ The beauty of this instruction mirrors the sounds that it produces, infused with a balance of anxiety and luminescence that feels wholly contemporary.” – William Robin, The New York Times

NPR First Listen features In the Light of Air: http://bit.ly/NPRInTheLightofAir

Stream In the Light of Air, Q2 Music’s Album of the Week: http://bit.ly/Q2InTheLightofAir

Watch the premiere of the video for “Luminance” on I Care if You Listen: http://bit.ly/ICIYLInTheLightofAir

Sono Luminus announces the August 28, 2015 worldwide release of In the Light of Air: ICE Performs Anna Thorvaldsdottir. In The Light of Air is a tetralogy of works by Icelandic composer Anna Thorvaldsdottir that together form a unified structure, written for viola, cello, harp, piano, percussion and electronics. The four main movements are titled “Luminance,” “Serenity,” “Existence,” and “Remembrance,” each connected by transitions to create a seamless flow. The album also includes Thorvaldsdottir’s Transitions for cello, which explores the theme of man and machine.

In the Light of Air was premiered by NPR on its First Listen series last week, with praise for the, “rumbling, evocative music . . . grounded deep in the beautifully austere landscapes of [Thorvaldsdottir’s] native Iceland.” Listen here: http://bit.ly/NPRInTheLightofAir

This week, Q2 Music features the disc as its Album of the Week, declaring, “not only can Thorvaldsdottir express the vast, emotional material of open space, but she understands its blueprints.” Listen here: http://bit.ly/Q2InTheLightofAir

The musical material on the album is constructed with a focus on subtle nuances and poetic textures that form lyrical gestures throughout the work. For In the Light of Air, Thorvaldsdottir designed an installation of metallic ornaments used in a solo percussion section in “Remembrance.” The ornaments, called klakabönd in Icelandic (which translates as “a bind of ice”), were created by Svana Jósepsdóttir. Parts of “Remembrance” echo the melody of a song that Thorvaldsdottir’s husband – Hrafn – wrote and dedicated to her in 2000.

In the Light of Air was written for the International Contemporary Ensemble (ICE) in 2013/2014 as part of ICElab. Live performances of the work include a light constellation that was designed in collaboration with ICE. The work was premiered by ICE at the Reykjavik Arts Festival in May 2014, followed by performances at various venues, including the Park Avenue Armory in NYC in August 2014 as part of Lincoln Center’s Mostly Mozart Festival, at the Museum of Contemporary Art in Chicago in April 2015, and as part of the Ojai Music Festival in June 2015.

Anna Thorvaldsdottir, recently named the New York Philharmonic Kravis Emerging Composer, frequently works with large sonic structures that tend to reveal the presence of a vast variety of sustained sound materials, reflecting her sense of imaginative listening to landscapes and nature. Her music portrays a flowing world of sounds with an enigmatic lyrical atmosphere. Thorvaldsdottir’s music is frequently performed internationally and has been featured at several major venues and music festivals such as Lincoln Center’s Mostly Mozart Festival in NYC, the Composer Portraits Series at New York’s Miller Theatre, ISCM World Music Days, Nordic Music Days, Ultima Festival, Klangspuren Festival, Beijing Modern Music Festival, Reykjavik Arts Festival, Tectonics, and the Kennedy Center in Washington, DC. Other orchestras and ensembles that Anna has worked with include the BBC Scottish Symphony Orchestra, the Oslo Philharmonic, the Iceland Symphony Orchestra, BIT20, Musiques Nouvelles, Yarn/Wire, and CAPUT Ensemble. Her works have been nominated and awarded on many occasions; Thorvaldsdottir is the recipient of the prestigious Nordic Council Music Prize 2012 for her work Dreaming. Thorvaldsdottir holds a PhD from the University of California, San Diego.

The International Contemporary Ensemble (ICE), described by the New York Times as “one of the most accomplished and adventurous groups in new music,” is dedicated to reshaping the way music is created and experienced. With a modular makeup of 35 leading instrumentalists, performing in forces ranging from solos to large ensembles, ICE functions as performer, presenter, and educator, advancing the music of our time by developing innovative new works and new strategies for audience engagement. ICE redefines concert music as it brings together new work and new listeners in the 21st century.

Since its founding in 2001, ICE has premiered over 500 compositions — the majority of these new works by emerging composers — in venues spanning from alternative spaces to concert halls around the world. The ensemble has received the American Music Center’s Trailblazer Award for its contributions to the field, the ASCAP/Chamber Music America Award for Adventurous Programming, and was most recently named Musical America Worldwide’s Ensemble of the Year in 2013. From 2008 to 2013 ICE was Ensemble-in-Residence at the Museum of Contemporary Art Chicago. ICE musicians serve as Artists-in-Residence at the Mostly Mozart Festival of Lincoln Center, curating and performing chamber music programs that juxtapose new and old music. In 2014 ICE began a partnership with the Illinois Humanities Council, the Hideout in Chicago, and the Abrons Art Center in New York to support the OpenICE initiative.

In 2011, with lead support from The Andrew W. Mellon Foundation, ICE created the ICElab program to place teams of ICE musicians in close collaboration with emerging composers to develop works that push the boundaries of musical exploration. ICElab projects have been featured in more than one hundred performances from 2011 to 2014, and are documented online through ICE’s blog, and DigitICE, its online library of performance videos. In 2014, The Andrew W. Mellon Foundation renewed its leadership support to launch the OpenICE initiative, which brings the full scope of ICE’s programming and educational activities for free to broader audiences around the world.