“[Songhoy Blues] amplify the voices of refugees while championing their strength in spite of opposition. Elf Kid highlights the immigration experience of the diaspora, sending out a call to reclaim his homeland” – The FADER 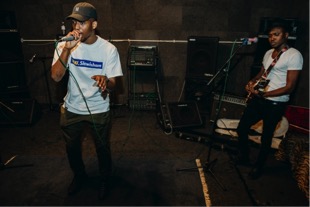 In their premiere of ‘Mali Nord,’ The FADER write, “As they seamlessly thread guitar solos and melodic vocals, the artists amplify the voices of refugees while championing their strength in spite of opposition”.

The band said, “With ‘Mali Nord’ we wanted to talk about something close to both the band and Elf Kid: refugees and immigration. It’s something that surrounds all of us, whether it’s from Libya before the fall of Gaddafi, or Syria, or within Mali itself. All these refugees who are in camps, those who cross the Sahara to the sea to go to Europe to find a better life, many have lost their lives in the desert. Good lives. We wanted to deal with that because it feels like a point the media misses a lot of the time.”

Elf Kid said, “Songhoy are a great band to work with because they are such good musicians and it’s been my pleasure to be a part of the album. I love the fact that they can combine strong melodies with deep and meaningful lyrics. Working on this track was a challenge to bring our two worlds together, I can’t wait to perform this live with them.”

Résistance is bold, inspiring and outward-looking, perfectly reflecting the position in which the band have found themselves following the massive success of their breakthrough debut, Music In Exile, released in 2015. It was recorded in the autumn of 2016 at The Pool studio in London with producer Neil Comber (MIA, Django Django, Crystal Fighters, Declan McKenna).

With more time and a wider armoury of equipment at their disposal, the album is the sound of Songhoy Blues stretching themselves, with hints of R&B, soul and hip-hop all fusing seamlessly with the band’s trademark exuberant sound, with themes for our time.

The band released their debut album, Music In Exile, in early 2015 receiving across the board praise, including a 5/5 rating in The Guardian who claimed, “they have all the makings of African-rock crossover heroes.” Rolling Stone named the band one of their 10 Artists You Need to Know, calling the album “a churning, loose-limbed garage-rock take on traditional Malian music.

October 3
Toronto, ON
The Mod Club