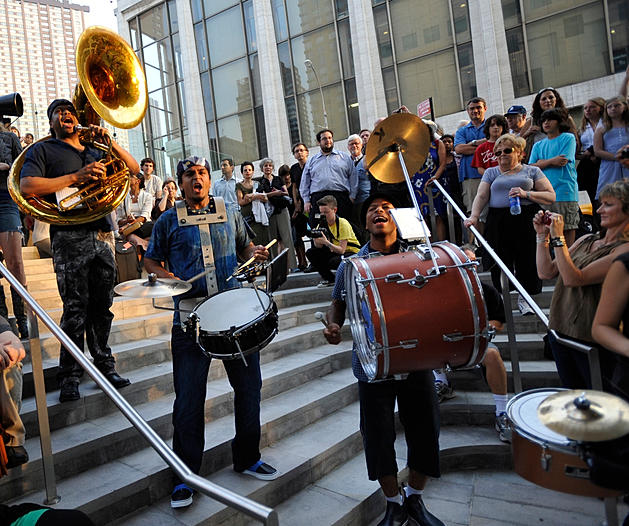 New York, NY — On Thursday, September 24, 2015 at 8:30pm, FONT Music 2015 will present Bang on a Can’s exhilarating marching band Asphalt Orchestra in its latest radical performance, Asphalt Orchestra Plays the Pixies: Surfer Rosa at Rockwood Music Hall Stage 3 (196 Allen Street). The New York Times praised Asphalt Orchestra’s “inventive, idiomatic arrangements” of Surfer Rosa in a review of the world premiere at Lincoln Center Out of Doors in summer 2014. Asphalt’s recording of Surfer Rosa was released on Cantaloupe Music in November 2014. The show will include Asphalt performing selections from “Asphalt Plays Pixies Surfer Rosa” and will also feature yMusic and Brandon Ridenour’s Founders on a program of new works and premieres. yMusic will perform the world premiere of a Font Music 2015 commission by Mick Rossi with CJ Camereri as trumpet soloist. Other highlights include works by Nico Muhly and Gabriel Kahane, duo works by Marcos Balter featuring Ryan Muncie on saxophones and Gareth Flowers on trumpet, and iconic drummer and composer Greg Saunier on drumset with Stephanie Richards on trumpet.

The Pixies released Surfer Rosa – the band’s first full-length record – in 1988. A cult hit then, the album’s influence has grown to mammoth proportions over the years; it is now considered one of the most important recordings of its time. Name-checked by Kurt Cobain, Billy Corgan, and PJ Harvey as a major influence, Surfer Rosa still sounds current today. With production by Steve Albini (who later produced In Utero and a host of other classic records), Surfer Rosa is raw, dirty, and utterly captivating.

With Surfer Rosa, Asphalt discovers a new direction for exhilarating acoustic music by paying tribute to a modern monument. Taking the originals both literally and inspirationally, Asphalt Orchestra’s rendition transforms screaming electric guitars into brass exhortations, searing vocals into a chorus of saxophones, and a lone piccolo takes on shrieking feedback while a 3-piece percussion section thrashes and grooves.

Asphalt Orchestra’s shows are driven by its virtuosic and uniquely physical music performance. Making innovative use of the stage, hall, or surrounding landscape not chained to instruments and equipment that normally limit musicians’ mobility, the band’s choreographed performances knows few boundaries. Along the way, Asphalt Orchestra explores and reveals a new form altogether – a mobile-musical-dramatic ensemble, bringing their unstoppable sound and exceptional talent to the stage.

Asphalt Orchestra tackles Surfer Rosa fresh from collaborations with David Byrne and St. Vincent, Yoko Ono and Goran Bregovic, and from covering Björk, Zappa, Mingus and Meshuggah. Since its debut, stretching 10 packed nights at Lincoln Center Out of Doors in New York over the summers of 2009 and 2010, Asphalt Orchestra has performed across the US and Canada, at London’s Barbican Centre, the TED Women conference in Washington DC, New York’s Alice Tully Hall and The Metropolitan Museum of Art, and more. Created by the founders of the “relentlessly inventive” new music presenter Bang on a Can (New York Magazine), Asphalt Orchestra brings together some of the most exciting rock, jazz and classical players in New York City who The New York Times called “12 top-notch brass and percussion players.”

About Asphalt Orchestra:
Asphalt Orchestra is a radical new street band that brings ambitious processional music to the mobile masses. Created by the founders of the “relentlessly inventive” new music presenter Bang on a Can (New York Magazine), Asphalt Orchestra unleashes innovative music from concert halls, rock clubs and jazz basements and takes it to the streets and beyond. The band brings together some of the most exciting rock, jazz and classical players in New York City who The New York Times called “12 top-notch brass and percussion players.”

Asphalt Orchestra has two lives: as an outdoor guerrilla musical force choreographed by Susan Marshall and Mark DeChiazza, and as Unpack the Elephant, the indoor experience, directed by Mark DeChiazza and Andrew Robinson. Elizabeth Hope Clancy is the group’s wardrobe stylist.

Featured on the cover of The Philadelphia Inquirer as “not your mother’s marching band,” Asphalt Orchestra has also been praised in Newsweek, The Economist, New York Magazine, The New York Times, The Wall Street Journal, The Onion, and Time Out New York, as well as interviewed and showcased on WNYC’s “Soundcheck,” Philadelphia Weekly, PBS SundayArts, and Time Out New York’s “The Volume.”

Asphalt Orchestra’s debut album was released in 2010 by Cantaloupe Music. The group is managed by Ken Thomson. For more information, visit Asphalt Orchestra at www.asphaltorchestra.com

About Bang on a Can:
Bang on a Can is dedicated to making music new.  Since its first Marathon concert in 1987, Bang on a Can has been creating an international community dedicated to innovative music, wherever it is found.  With adventurous programs, it commissions new composers, performs, presents, and records new work, develops new audiences, and educates the musicians of the future.  Bang on a Can is building a world in which powerful new musical ideas flow freely across all genres and borders. Bang on a Can plays “a central role in fostering a new kind of audience that doesn’t concern itself with boundaries.  If music is made with originality and integrity, these listeners will come.” (The New York Times)

Over 27 years, Bang on a Can has grown from a one-day New York-based Marathon concert (on Mother’s Day in 1987 in a SoHo art gallery) to a multi-faceted performing arts organization with a broad range of year-round international activities. “When we started Bang on a Can, we never imagined that our one-day, 12-hour marathon festival of mostly unknown music would morph into a giant international organization dedicated to the support of experimental music, wherever we would find it,” write Bang on a Can Co-Founders Michael Gordon, David Lang and Julia Wolfe. “But it has, and we are so gratified to be still hard at work, all these years later. The reason is really clear to us – we started this organization because we believed that making new music is a utopian act – that people needed to hear this music and they needed to hear it presented in the most persuasive way, with the best players, with the best programs, for the best listeners, in the best context. Our commitment to changing the environment for this music has kept us busy and growing for the last 27 years, and we are not done yet.”

Current projects include the annual Bang on a Can Marathon; The People’s Commissioning Fund, a membership program to commission emerging composers; the Bang on a Can All-Stars, who tour to major festivals and concert venues around the world every year; recording projects; the Bang on a Can Summer Music Festival at MASS MoCA – a professional development program for young composers and performers led by today’s pioneers of experimental music; Asphalt Orchestra, Bang on a Can’s extreme street band that offers mobile performances re-contextualizing unusual music; Found Sound Nation, a new technology-based musical outreach program now partnering with the State Department of the United States of America to create OneBeat, a revolutionary, post-political residency program that uses music to bridge the gulf between young American musicians and young musicians from developing countries; cross-disciplinary collaborations and projects with DJs, visual artists, choreographers, filmmakers and more.  Each new program has evolved to answer specific challenges faced by today’s musicians, composers and audiences, in order to make innovative music widely accessible and wildly received. Bang on a Can’s inventive and aggressive approach to programming and presentation has created a large and vibrant international audience made up of people of all ages who are rediscovering the value of contemporary music.