You are here: Home / Music / NYC-Based Band All Types of Kinds To Perform LIVE at Adventureland In Farmingdale Wednesday, August 1st
Views: 543

NYC-Based Band All Types of Kinds

To Perform LIVE at Adventureland

Mixing A Unique Blend of Influences From Rock to Blues, Folk, and Hip-Hop – The Bands Unique Multi-Genre Approach Lends A New Perspective to Alternative Music July, 2018 (Long Island, NY) – In a city often oversaturated with musicians of every genre constantly performing and creating, it takes a special group of artists to truly stand out amongst the crowd that produce a truly unique sound, and New York City’s All Types of Kinds truly live up to the namesake. With an upcoming show slated for Wednesday, August 1st at one of Long Island’s oldest amusement parks – Adventureland (2245 Broad Hollow Road (RT.110) Farmingdale, NY, 11735) park-goers will have the chance to experience the band LIVE for the very first time! But for those who still can’t get enough of the band – catch them July 29th at The Knitting Factory in Brooklyn AND at the Long Beach International Film Festival’s Concert on the Beach on Friday, August 3rd at 4PM!

All Types of Kinds (or ATOK) plays a wide variety of music ranging from rock to pop, folk, punk, funk, hip-hop, blues, jazz, and country – even sometimes all at once. The members come from diverse backgrounds that make for an amalgamation of musical textures and vibes. Their EP, “Love Songs (Or Songs For Your Ex)” debuted on Valentine’s Day 2018 and they are currently gearing for dates all over the country.

The band consist of Ray Rubio (Guitar), Billy Conahan (Guitar), Berk 0 (Percussion), and Rocco Stroker (Guitar) – all of whom have unique musical backgrounds. Ray, 20, a multi genre artist and singer/songwriter, hails from Harlem NY and has also been on stage from young age, mainly theater productions. Ray attended the American Academy of Dramatic Arts in 2014, and since then has been performing his music in the New York Metro Area and Richmond, Virginia. Billy, 25, is a queens native whose been on the stage since his early teens as a stand-up comedian, singer/songwriter folk artist playing his own folk tunes as well as cover tunes. Berk O, singer and percussionist, is from Brooklyn and also contributes to the band’s songwriting process, while Rocco is the newest member of the band – playing bass, guitar and as an incredible vocalist. He hails from New Fairfield, Connecticut. 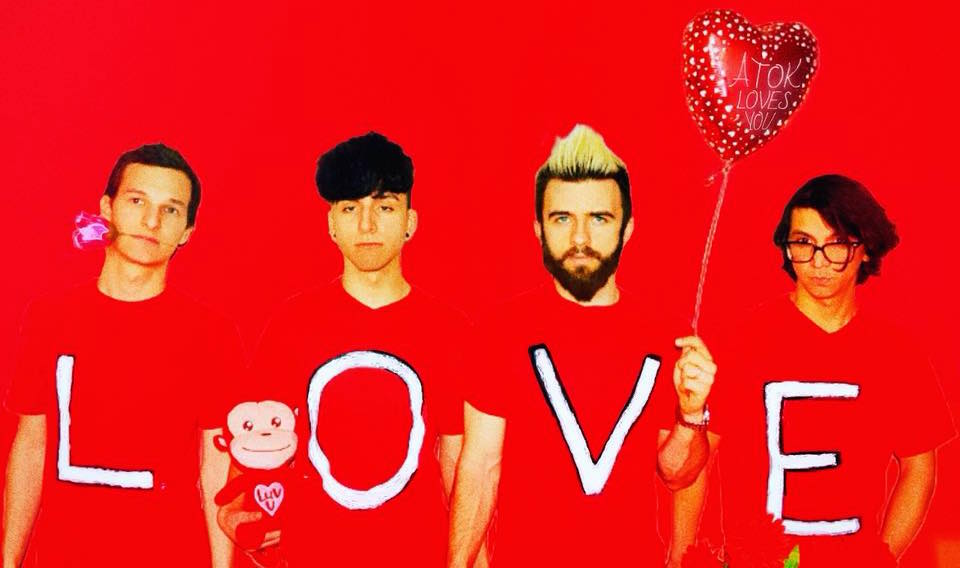 With the goal of becoming a full-time, self-sufficient, self-produced band, able to tour and create their own audio and video products on a regular basis, they plan to soon follow up their debut with a sophomore effort in late 2018. Unlike other bands who strive for major-label greatness, ATOK shys away from fitting into an industry mold, and often scoff at the idea of being referred to as a ‘boy band’.

Believers in finding a way to share their music while remaining firmly in the driver’s seat, they continue to write, practice, and enjoy playing their music for any crowd that will have them. Making friends from all over the world by busking on the NYC streets has even allowed them to meet and collaborate with like-minded musicians.

Now, as they get ready for THREE upcoming performances – Sunday, July 29th at The Knitting Factory, Wednesday, August 1st at Adventureland, and at the Long Beach International Film Festival’s Concert on the Beach on Friday, August 3rd – there’s plenty of opportunities to catch these recent “Your Big Break” contest winners who’ve been praised for their “polished precision, sweet harmony, musicianship, artistry, versatility and originality in their smart lyrics”.

To Purchase All Types of Kind’s “Love Songs (Or Songs For Your Ex)” via iTunes, VISIT: https://apple.co/2MN7W5o

For More Information on All Types of Kinds, VISIT: Facebook.com/ATOKMusic