For music, romance and women’s empowerment enthusiasts alike, April Kirkwood is proud to release BIG GIRLS DO CRY, the story that Frankie Valli and the Four Seasons fans have been waiting for, a look into the glitz and the glory that was the Jersey Boys’ story as witnessed by one of the group’s biggest fans.

In the tradition of scandalous tell-all’s by rock groupie loyalty like Bebe Buell, Pamela des Barres, and Pattie Floyd comes a feisty and fun new voice: April Kirkwood. Our intrepid narrator is a sassy blonde Ohioan with a love of music. And she has one of the craziest stories in Four Seasons history.

In BIG GIRLS DO CRY, (trailer https://www.youtube.com/watch?v=ze5hjDW1jdQ) Kirkwood courageously shares her story to give others insights of where those feelings people have buried deeply in their conscious and unconscious grow from and how it affects their romantic lives. April is presently working on her second book, a workbook for those who are stuck with recurring unsatisfactory intimate relationships. She provides steps to remove the imprinting and blocks so they can find the love they deserve. April believes in love and empowers others in workshops with warm laughter, flowing tears, and healing exercises so each person can find love, keep it, and enjoy romance. With her literary work, April Kirkwood longs to empower women by sharing her trials and insight while working with them to find a newfound sense of self confidence, acceptance and worth.

Beginning with a meeting with Valli when Kirkwood was eight years old, she was 16 on the night she lost her virginity to him when the crooner was 39.  The on-again off-again relationship would last over 40 years through multiple mistresses and marriages. “He was so glamorous,” Kirkwood says about the Jersey Boys legend.  “He was the love of my life, and I don’t think he ever cared for me.” 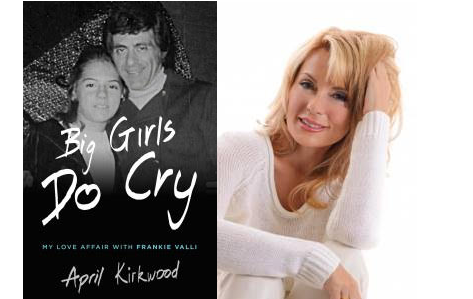 Valli would contact Kirkwood to join him on the road or fly her to different locations to be with him and she waited for his calls that would come randomly and often years apart.  Growing up in small-town Ohio, Kirkwood, influenced by her mother, saw Valli as an opportunity to live out her dreams.  “In my heart, I believed I would be the next Mrs. Frankie Valli,” she writes.

Today, Kirkwood still attends Valli concerts and recently tried to present her book to the ageing star but was rebuffed by security.   After dealing for so long with the far-reaching effects of her star-crossed relationship, Kirkwood finally says “I am done.  I am so done.”

April Kirkwood is a graduate of Youngstown State University with two masters in education—in school and community counseling. April worked more than twenty-five years in public education and in the mental health field as a social worker, teacher, guidance counselor and mentor for new teachers. She presently lives in Florida and Ohio, and spends most of her time writing, sharing her story with others, helping women, and speaking.

For every woman who has loved a powerful man and every woman who can’t seem to find a healthy relationship, Kirkwood, who holds two Masters Degrees in counseling, has found through intense study and soul searching the right answers to questions about misplaced love.

To Learn More About April, Visit the links below: