You are here: Home / Music / Television / BENJAMIN CLEMENTINE TO PERFORM ON “THE TONIGHT SHOW STARRING JIMMY FALLON,” WEDNESDAY, JULY 13; Clementine Is Currently Touring the U.S. Amidst Growing Acclaim for His Mercury Prize-Winning Debut Album, At Least for Now
Views: 669

Clementine Is Currently Touring the U.S. Amidst Growing Acclaim for His Mercury Prize-Winning Debut Album, At Least for Now

The remarkable success story of Benjamin Clementine continues when the artist appears on “The Tonight Show Starring Jimmy Fallon,” July 13. He will sing “Cornerstone,” a highlight of his Mercury Prize-winning album At Least For Now (Capitol Records). “Cornerstone” is the song that launched Clementine’s professional career; his performance of it on the BBC2’s iconic show “Later…With Jools Holland” caused a storm on Twitter, with Sir Paul McCartney among the first to congratulate him on an “amazing” performance.

Clementine stops at “The Tonight Show” in the midst of U.S. tour that gives audiences opportunities to experience the British singer, songwriter and pianist’s intimate, emotionally charged live performance, which recently prompted Jon Pareles of The New York Times to write, “Within songs, he was the picture of passionate obsession” and “Mr. Clementine’s stage presence is striking.” Please see below for upcoming U.S. shows. Rolling Stone, naming Clementine one of their New Artists You Need to Know, described Clementine this way: “Nina Simone’s brother steps into an elegant French café, sits down at the piano and tears open a vein.” Please see below for an itinerary of upcoming shows. 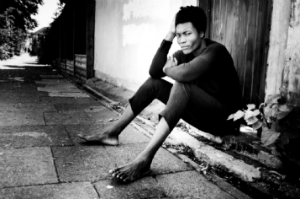 Clementine’s embrace by American audiences has accelerated since he won the Mercury Prize, British music’s most internationally prestigious accolade, in November 2015. This March, The New York Times’ T Magazine featured him on the cover, and David Byrne, both a hero and an admirer of Clementine, wrote the profile, accompanying him back to the tough Edmonton section of London where Clementine grew up teaching himself to play and sing, influenced by Erik Satie and, a little later, Antony and the Johnsons. In April, Burberry launched a new advertising campaign directed by Oscar-winning filmmaker Steve McQueen, with At Least for Now track “I Won’t Complain” as its soundtrack, and NPR Music premiered a Tiny Desk Concert by Clementine. In May, Capitol released a deluxe edition of At Least for Now with several bonus tracks; Clementine made his U.S. television debut, performing “I Won’t Complain” on “The Late Late Show with James Corden”; and he released the official music video for “I Won’t Complain,” directed by Craig McDean and Masha Vasyukova and premiered by The Fader.

Even before the Mercury Prize, Clementine’s was already a singular story. Inspired by heroes like Leonard Cohen—and with no emotional or employment ties to keep him in London—Benjamin left for Paris at age 20; he worked in kitchens and busked out of financial necessity. First in the corridors of the Place de Clichy station and then on the metro, he built his voice and refined his craft as he made enough money to move first to a hostel and then into a room of his own. He eventually returned to London, where he was invited to make his U.K. live debut on “Later…With Jools Holland.” In France, he won the Best New Act honor at 2015’s Les Victoires de la Musique, the equivalent of the GRAMMYs.

The New York Times has called At Least For Now (Capitol Records) Clementine’s “declaration of selfhood,” and has described his voice as a “frequently stunning instrument, a bladelike tenor that can swoop into either a clarion cry or a guttural scowl.” NPR Music has declared, “A startlingly unique voice takes art pop into new corners,” adding, “Clementine is nothing if not audacious on At Least For Now.” The Wall Street Journal wrote, “It’s a recording that invites dedication to a performer who is willing to share what he feels without idealizing his journey toward self-discovery.”