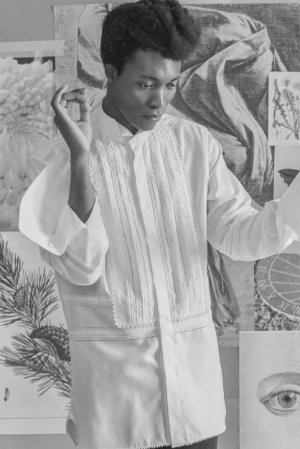 The acclaimed British singer-songwriter Benjamin Clementine has released a new song, “Phantom of Aleppoville,” accompanied by a music video from photographer Craig McDean and filmmaker Masha Vasyukova. Written, recorded and produced by Clementine, “Phantom of Aleppoville”finds him exploring new musical territory on the heels of his Mercury Prize-winning debut album, At Least for Now (2015). The new track comes soon after “Hallelujah Money,” Clementine’s recent collaboration with Gorillaz.

Clementine wrote “Phantom of Aleppoville” after reading and being deeply affected by the work of pioneering British psychoanalyst Donald Winnicott. Winnicott wrote extensively about children who have experienced bullying at home and at school, and found that while their trauma was not comparable in scale to the suffering of children displaced by war, its effects followed similar patterns. Seeing in Winnicott’s writing a mirror of his own childhood experience, Clementine imagined a place, the “little city of Aleppo,” where children encounter such bullying. He explains, “Aleppoville is a place where many are bullied if not all, but no one understands nor see why; Phantom.”

Clementine’s 2015 debut, At Least for Now, garnered immense international acclaim and awards including the Mercury Prize, British music’s most internationally prestigious accolade, and the Best New Act honor at Les Victoires de la Musique, the equivalent of the GRAMMYs. In the U.S., he performed on both on “The Late Late Show with James Corden” and “The Tonight Show Starring Jimmy Fallon.” The New York Times’ T Magazine featured him on the cover, and David Byrne, both a hero and an admirer of Clementine, wrote the profile, accompanying him back to the tough Edmonton section of London where Clementine grew up. The New York Times called At Least for Now Clementine’s “declaration of selfhood,” and has described Clementine’s voice as a “frequently stunning instrument, a bladelike tenor that can swoop into either a clarion cry or a guttural scowl.”

Clementine performs at Carnegie Hall on October 5. Other U.S. live shows will be announced soon.

In : Arts News and Events